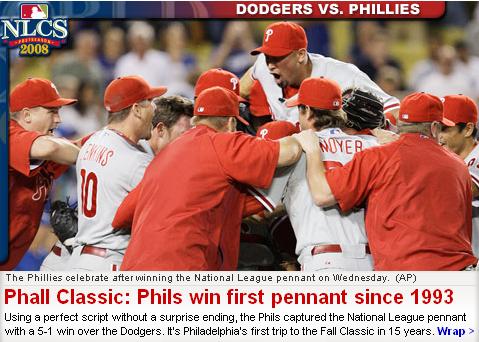 I’m kind of incoherent right now, you guys.  I don’t even know what to say, mainly because I have so much to say, and I’m afraid I’m gonna start babbling like an idiot.  I think I’m gonna go with bullet points tonight so that I don’t risk writing long, rambling paragraphs.

* Bilfy McBilf himself, Cole Hamels, pitched an incredible game.  (It goes without saying that he looked damn good pitching that game, too, but I’m gonna say it anyway.  HE WAS SMOKIN’ HOT TONIGHT.)  He had me worried there in the first inning with a lot of high pitches, but really managed to calm himself down for the rest of the 7 innings he pitched.

* Speaking of the first inning, how ’bout that J-Roll?  Just like the NLDS game against Milwaukee where the Phillies won that series, J-Roll started off the game with a super-awesome home run.  Way to keep that momentum with the Phillies, J-Roll!

* Although Utley was hitless tonight, he managed to do some good work on the bases today, and Ryan Howard, who’s been a little on the slumptacular side during this series was truly fantastic tonight.

* The Flyin’ Hawaiian made some excellent plays tonight (as did Utley–he had one truly hot diving catch!).  As much as I’m thrilled that Hamels is the series MVP, I really would have liked to see that award go to Victorino.  Yeah, Hamels pitched two fantastic games, but Shane was consistently making insane plays in the outfield, catching balls that didn’t look to easy to catch, and getting on base, hitting home runs, and just generally ticking off the Dodgers.  He really managed to get under the Dodgers’ skin and rattle them up–much like Manny did with the Phillies.

* Not sure what was up with the Dodgers’ abysmal fielding tonight, but it played a big role in the Phillies winning the game.  Furcal is totally my new favorite Dodger!  Thanks, ol’ buddy!  We heart your errors!  (By the way, Billingsley’s cute.  A stinky NLCS pitcher, but really cute.  Not Cole Hamels kinda cute, and apparently not Cole Hamels kinda talented, but cute.  Thanks for a fantastic three first innings, dude!)

* On a pitching-related note: Lidge is a SUPERSTAR!

I couldn’t possibly be more excited that this team’s going to the World Series.  I’ve made a lot of screaming phone calls tonight, done a lot of silly little dances, run out to buy donuts for my co-workers (because they’re gonna need some serious sugar in order to keep up with my energetic, excited self in the morning!), left people a lot of hyper Facebook messages…  I’m on a Phillies high!  I’m so proud of this team.  I’m proud of their determination, their focus, their talent, their hard-working attitude, and their truly uncanny knack for having and/or making stuff happen at exactly the right moment–having a really key hit or making a truly superb defensive play.  I’ve seen a lot of Phillies playoff magic happen in the NLDS and NLCS.  I hope that magic carries over into the World Series.  The Phils will face a tough AL opponent (presumably the Rays, but it’s October, and the Sox are no strangers to comebacks, so who knows at this point?), but no matter what happens, it’s gonna be a really exciting (and BILFalicious!) series.