Oh, Doc, you look so handsome on the cover of the latest Sports Illustrated!  But in light of the Sports Illustrated curse that may or may not be real, couldn’t you have suggested that they put Johan Santana on the cover instead, or maybe the entire Braves starting rotation?  Look, we’ve already got Blanton on the DL for 3-6 weeks and Lidge out for who knows how long (although this might not be a bad thing)…our pitchers are already cursed enough.  Here’s hoping we haven’t just added fuel to the cursed fire with that mighty fine SI cover…

No, I don’t want the Cubs’ shirts, despite the fact that Theriot and Hoffpaiur are total BILFs.  I’m gonna want the Phillies and Twins gear, which I’m hearing is coming out soonsoonsoon (but not soon enough, dammit!).

I’ve been reading up on the new Victoria’s Secret/MLB clothing, and I swear I’m the only girl I know (with the possible exception of my friend Lisa, and she might only be excited about it when she can find Orioles gear in her local Vicky’s) who’s seriously stoked about this.  A lot of people I know or whose blogs I read aren’t down with this clothing, for various reasons–they’re not into the overly girly/sparkly/hearts thing, they’re not sure the clothes will fit them nicely, they’re not sure the clothes appropriately reflect the spirit of baseball, etc.  And those are all totally valid reasons to not be down with these clothes.

But for a girl like me?  A girl who lives for glitter?  Who goes to the ballpark in 5″ red stilettos?  A girl who is sick of having to buy youth Medium shirts (not women’s, which are often too big, but YOUTH) so that they are form-fitting and don’t hang off her?  A girl who would totally not be embarrassed to wear a shirt that says “love love love Phillies” because, well, she DOES love, love, love her Phillies?  For a girl like me, this is gonna freakin’ rock.  Finally!  GIRLY CLOTHING!  Stuff that will make me look cute(r)!  Stuff that might actually make my boobs look good instead of flattening them out (yeah, the youth M shirts fit me, but they’re really not built for people with boobs–they’re built for, like, 13-year-old boys).

I’m not gonna be embarrassed to wear this stuff.  Sure, some of it has a little bit of an airheady vibe, but you know what?  Just as much as I know who’s hot on which teams, I know the stats of the players who matter.  I know I’m gonna kick *** and take names in fantasy baseball this year (um, hopefully…hehe!).  And I know that whether or not I’m wearing a shirt that says “I only kiss Phillies fans” (a great rule to live by, actually) that admittedly looks slightly airheady, I can talk baseball with the best of ’em.  And soon I’m gonna look even cuter while doing so.

* My parents are in Clearwater right now watching Hamels pitch.  Totally jealous?  You bet your *** I am!

* Looks like the hottest Texas Rangers need a nurse.  Hamilton and Kinsler are injured…poor babies!  I’d gladly take care of them…

* My favorite non-Phillies, non-Twins BILF, Cliff Lee, seems to have gotten a little aggressive against the Diamondbacks yesterday.  Behave, gorgeous!

As much as I love the hot sideburns, gorgeous eyes, pretty lips, and
flawless backside of Joe Mauer, I think the reason I REALLY adore him
is because he is, from all accounts I have EVER read, an incredibly
nice guy.  This article just further proves my point.
Going out of his way to make an old friend/new teammate feel
comfortable is really commendable–I mean, it’s spring training,
there’s a little thing called a contract for Mauer to think about, and
he’s still taking the time to help Hardy (also kind of a BILF) adjust to his new team and new
area.  He may be the most good-hearted, as well as good-looking, BILF ever!

Too much baseball stuff to read about–and the season hasn’t even started yet!–and too little time!

This guy is getting all healed up
and ready to pitch another stellar season (yes, I’m absolutely still a
Lee fan even though he’s not a Phillie anymore…I was a big Lee fan
before he ever became a Phillie, so nothing has changed in that
regard)…but this super-attractive BILF seems like he needs a little TLC as he heals his shoulder.  I may be biased, but I think I’d make a really great nurse…or at least rock a really great nurse’s costume…

I’ve really been enjoying this Twins blog I just stumbled on recently…and in other Twins news, their minor league pitcher, Loek van Mil,
is REALLY hot.  He’s a pitcher (that’s hot), and since he’s from
somewhere foreign–the Netherlands–I assume he’s got an accent (that’s
really hot).  He’s also 7’1″.  I have no idea what I’d ever do with a
7’1″ pitcher if I ran into him (except bite his ankles…I’m only
5’2″), but still.  He’s cute.  I hope he makes it onto the Twins’
roster at some point in the season.

And this article makes me optimistic about the Phillies’ 2010 season.
If Dubee’s telling the truth and we’re gonna get a MUCH better Hamels
this year than we had last year, I may very well be the happiest girl
on the planet.  I’d love to see BILFy McBILF return to his 2008 form
(Lidge, too, for that matter!).

I cannot freakin’ WAIT for this season to start!

Yes, I know they’re not there to look good–they’re there to play ball.  But when you get used to ’em looking good, and the first pictures coming outta Spring Training make ’em look slightly scary…well, we’ve just gotta hope that they’re focusing so hard on their training that they simply don’t have time to look in the mirror and/or acquaint themselves with razors.

Joe Mauer, who was apparently mistaken for Nick Blackburn (also a BILF) due to his beard, doesn’t look too scary.  He looks much better clean-shaven, but he at least looks well-groomed.  Plus, I’m hearing that the beard gets shaven off today, which is fabulous news (I want to see the post-razor pictures, please!). 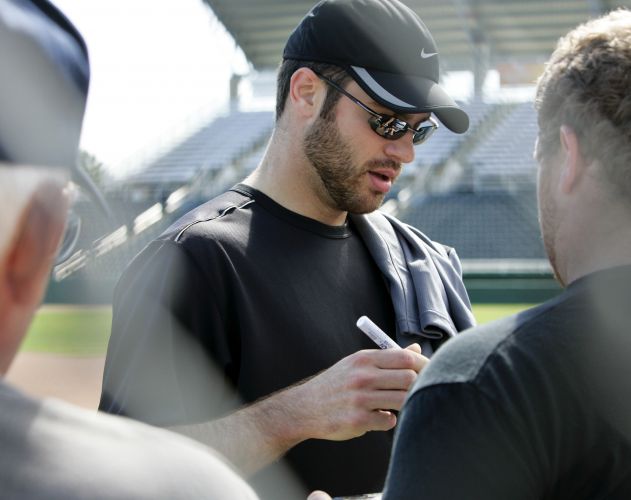 But Jayson Werth?  Totally scary.  Is he trying to channel his inner Sasquatch?  He looks much less like a svelte right fielder and much more like a hick or a caveman.  Let’s hope that, like Mauer, Werth has the good sense to shave that thing off his face…

The Werth picture was originally found here.  Hat tip to my mom for alerting me to the fact that Werth looks like some sort of scary mountain man…

I know, I know–I haven’t updated in a while.  I’ve been going through a wee bit of baseball depression.  Yes, I’m thrilled my Phillies got Doc, but dammit, I miss Cliff Lee.  Lee was a favorite of mine before he came to Philly, and he’ll still be a favorite now that he’s no longer there, but…it’s just not the same, you know?  I adore him, and he was my top priority to meet this year at ALS Night, and now I can’t because he won’t be there because he plays with freakin’ Seattle now.  It’s not that I’m not grateful to have Halladay, but…Lee was the BILFiest BILF, you know?  So I’m still kind of sad.

But these next few items I’m gonna post…well, you’ll see why I came out of my baseball depression to post ’em.  They’re juicy, juicy, juicy.

As much as I love Pat Burrell, I’m no stranger to making fun of him a little bit.  But seriously, Pat?  I know this is just a little whisper-down-the-lane type of rumor, but if this is true…you’ve really outdone yourself this time.  Check out the second little blurb on this Deadspin article (NSFW!).  Oh, Pat the Bat…how did you manage to get “jealous” and “laughing hysterically” so confused?  I know ladyparts don’t generally laugh, but if that scenario happened to me, I’m pretty sure mine would actually start snickering.

And this CDAN blind item is priceless.  Absolutely priceless.  I’m a very open-minded girl, and even I think this ballplayer’s habit is a little on the strange side.  (And did the ballplayer really think admitting his little kink would actually impress any of the women within earshot?)  The general consensus seems to think the ballplayer in question is Barry Zito, Brad Penny, or Derek Jeter.  When I first read this, I immediately thought of A-Rod–because I could totally see him doing this…in front of a mirror…by his freakin’ centaur painting…, but the description of who the ballplayer has dated doesn’t seem to line up with A-Rod.  I can’t help but think it’s Jeter, but wouldn’t Enty have acted more shocked if it were him (since Jeter tries to have a squeaky clean image in the public eye)?  Which makes me think it’s perhaps Zito…because, well, Zito’s a little wacky, and this is a hell of a wacky thing to announce.  So, dear readers, what are your thoughts on this, um, sticky issue?

P.S. I think I’ll be checking into future issues of GQ just to look at their photo shoots and see if I can figure out which ballplayer it might be…

Congratulations are in order for Joe Mauer, this year’s American League MVP!  Any idea how happy I am that Mauer won this award over Jeter and Teixeira?  It’s nice to see that it wasn’t a popularity contest and that the player who most deserved the award actually got the award…  Even with being out of commission for a whole month of the 2009 season, Mauer had some seriously crazy stats.  He earned this award!

Can you tell I have no idea what to do with myself now that baseball season’s over?  Except, of course, make goofy BILF-related things with Photoshop…

The American League Gold Glove winners were announced today.  Buehrle, Teixeira (for whom I have a rather intense and inexplicable hatred), Polanco, Longoria, Jeter, Jones, Ichiro, Hunter, and one of my favorite BILFs, the Twins’ Joe Mauer. Congrats to all, and a special congrats to the really hot ones (Mauer and Longoria, I’m lookin’ at you…but not you, Jeter, because you’ve got an oddly-shaped head and I still have no idea why you’re considered attractive).

The picture above is from one of my very favorite Mauer plays this season…where he blocked the Yankees’ Brett Gardner at the plate after faking a throw to first.  Smart guy, that Mauer.  Gotta love his defensive skills (and his hot sideburns…and his butt…OK, I’ll shut up now).