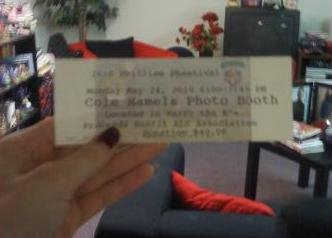 It’s been a wild past few days for us Phillies fans, huh?

The good: Taking 2 out of 3 in this past weekend’s series with the Mets.  Combining Saturday’s and Sunday’s runs, we had 21…to their 5.  Love it!  Santana got shelled (love that, too).  Victorino hit a grand slam.  Doc was incredible, and Moyer put forth a pretty solid effort (who’d have thought he’d outlast Johan the Great?  AND be the guy that gets walked so that a run scores?)  Beautiful.  Just beautiful.

Of course, there’s the bad: We got our buttshanded to us on Friday.  Kendrick still sucks.  And people like this moron infested my lovely city of Philadelphia all weekend long.

And then there’s the stupid: Ryan Madson, I’m looking at you.  Kicking a chair out of frustration and breaking your toe?  STUPID.  Also, moronic Phillies fan who ran onto the field and got Tasered?  Between you and Vomiting Phillies Fan from a few weeks ago, you’re making us ALL look like jerkfaces.  (We’re not all jerkfaces.  But the nice/cool Phillies fans don’t seem to make many headlines.)

And, finally, the hot: We saw the return of Brad Lidge, and damn, have I missed watching him!  He didn’t implode, which is also hot (not that he really had a chance to, though).  And the hottest thing of all?  In 20 days, I’m gonna be meeting COLE HAMELS.  I got my Photo Booth ticket in the mail yesterday…I’m already so excited/hyperactive/etc!  *squeal*  Yes, I know, I’ve met Hamels before.  But he’s still hot, and so I want to meet him again.  I cannot believe I have almost 3 weeks to wait!  At least between now and then I’ll be going to a Twins game, which will temporarily distract me from Hamels-related hyperness (although hopefully I get my voice back in time to meet Hamels…screaming at all the gorgeous Twins can really take its toll on one’s throat, you know!)

Right now both of my teams (Phillies and Twins) are in first place.  Not by much, but by enough.  And hopefully they both keep kickin’ butt…  🙂

Holy crap.  I cannot remember ever watching such an intense, nail-biting, face-hiding game.  There were moments when I could barely breathe.  And where my heart was pounding so hard I thought it was gonna come flying out of my chest.

That was truly a hell of a game.  There were some crazy plays (Ben Francisco’s amazing catch in left field and Dexter Fowler’s insane jump over Chase Utley on his way to second, just to name a few).  There was some great pitching–Lee was excellent again.  I wished we could have gotten another complete game outta him, but Manuel did the right thing by relying on Madson, Eyre, and Lidge to help out.

But the most impressive thing, I think, was that the Phillies did something we’ve rarely seen out of them this season–they made a truly amazing comeback.  Admittedly, I’d been really worried.  They’d had bases loaded twice and had squandered the opportunities.  They had a couple fielding errors.  They were not entirely playing at their best.  But once that awful eighth inning happened, when the score changed from 2-1 Phillies to 4-2 Rockies, these Phillies were not content to let that happen, to go to a game 5, to give up their momentum.  So they went and got back that momentum.  In the ninth inning, Victorino, Utley, Howard, Werth…they ganged up on Street and they took back their lead.  And then Lidge and Eyre helped them keep that lead.  This is the kind of teamwork, the kind of rally, that makes them the Fightin’ Phils.  And this is exactly the sort of thing we want to see out of them as they prepare to face their 2008 NLCS foe, the Los Angeles Dodgers, once again.

A few BILF-related tidbits: Cliff Lee had gotten his hair cut and had shaved his face since NLDS Game 1 (when I saw him, he was kinda scruffy).  GodDAMN, he looked good tonight, and I couldn’t help but think (many times) how it would be a lot of fun to just give him, you know, a friendly couple of nibbles on his pretty neck.  Huston Street also looked great (especially, but not limited to, when he was helping to ensure a Phillies win), and I’d be more than happy to go console him after that tough, tough loss tonight.

I’m already looking forward to seing the Phillies in the NLCS.  That being said, I’m grateful to have 2 days where I don’t have to watch a baseball game (the NLCS begins Thursday) so that I can actually get something productive done…screaming/swearing at the TV does not count as “productive.”  😉

And on a final note–it’s nice to see that we’ve finally repaid the Rockies for kickin’ our butts in the 1997 NLDS.  Yay!

I’m still on a BILF high from attending the Phillies’ ALS Night a few weeks ago.  🙂  Here are a few of the highlights…

Me meeting our very own Flyin’ Hawaiian… 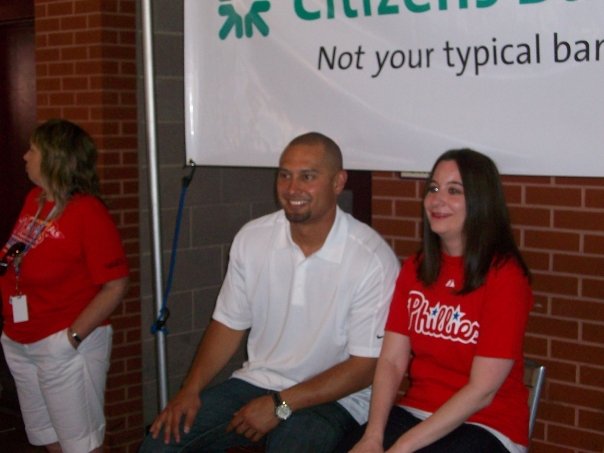 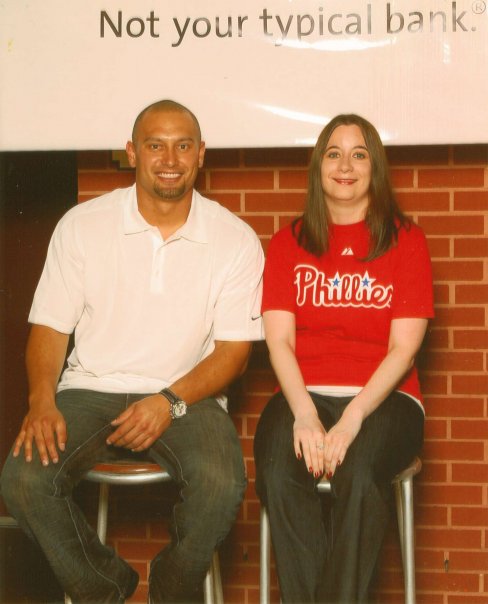 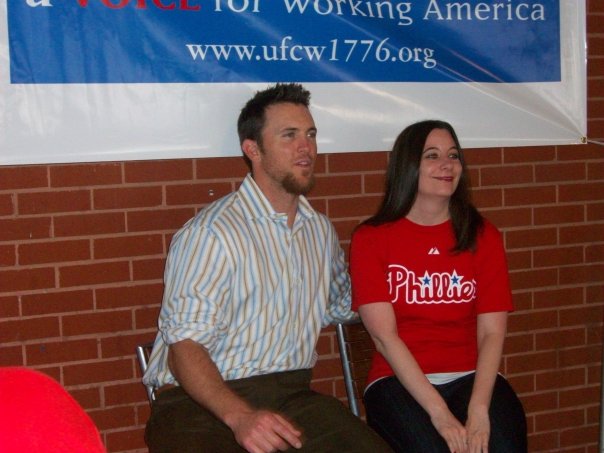 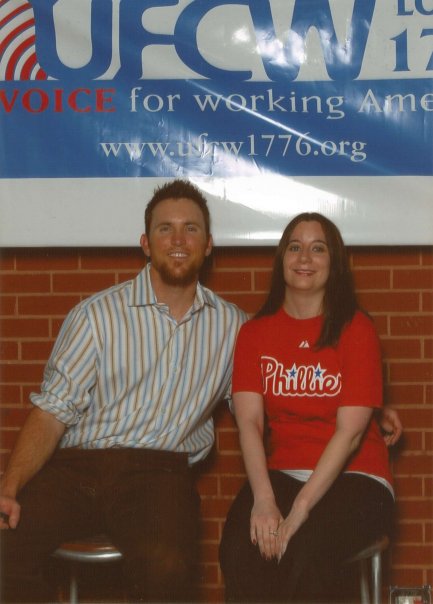 I didn’t have a chance to meet him this year, but of course I couldn’t help finding King Cole’s table and taking a few pictures of him.  Could this man be any more BILFalicious?!?

I still think Jayson Werth is hot even though he has a tendency to wear his sunglasses entirely too much.  (He wore them for all of last year’s ALS Night, too.)

These aren’t BILFs, but they’re totally awesome anyway…  Our World Series trophies from 1980 and 2008! 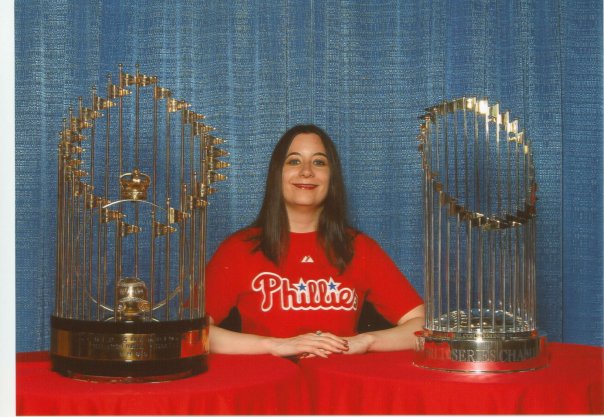 Oh my goodness! I could barely
write coherently about the All-Star Game–I was too busy fanning my
brow every time I saw Josh Hamilton do something hot, or swooning each
time I witness Joe Mauer lookin’ good… Below is my disjointed
recap/account of the NL and AL All-Star hotties. Keep in mind that it
might be a little biased since I was rooting for the NL to win this
one…

–CHASE! Did you almost let that ball hit you in the head? Oh, c’mere, Chuttles. I’ll make it all better.

–OMG OMG OMG THERE’S JOSH HAMILTON!!!! Never mind that I didn’t know who he was 24 hours ago. I’m thisclose
to being obsessed. This is all the fault of his tattoos. if he didn’t
have all the tattoos, he’d just be kinda hot. But he is AMAZINGLY hot.
Purr.

–A-Rod’s
pretty hot. I never noticed that before. Somebody’s gotta be a hot
Yankee now that Phillips isn’t on the team anymore. I guess that
somebody is A-Rod.

–Ryan Braun, you look so young. I can’t possibly think you’re cute; you look like your voice still squeaks when you talk.

–Chipper Jones…not bad, not bad.
Although if we’re talking Braves, I’m totally a Francoeur girl. But
Francoeur was nowhere near making it to the All-Star game this year.
Hell, he was barely back in major league baseball by that point…

–Matt
Holliday, are you cute or not? Off with the hat. I can’t tell what the
hell you look like with that silly hat on. On a side note, I hate the
Rockies’ uniforms; they look so out of style.

–What is the deal
with Grady Sizemore? I’m not convinced he’s hot. Not at all. Sorry,
Grady’s Ladies. I just don’t see it. Yet. Convince me.

–Is the
entire Texas Rangers team hot? They almost have more hot players than
the Phillies do. Holy crap, I think I actually have a reason to visit
Texas sometime.

–Justin Morneau–such a cutie. Not hot, necessarily, but cute.

–Joe
Nathan? Is hot? He’s on my fantasy baseball team (picked purely for his
talent) and I didn’t even know he was kinda hot? WTF? Am I losing my
touch?

–Who is this Wilson dude on the Giants who’s hot? I need
to get to know this guy. And not because I need another reliever on my
fantasy team. (Note: upon further research, this guy is Brian Wilson.
It’s weird thinking someone with the same name as a Beach Boy is
attractive.)

–Billy Wagner, I effin’ HATE you even more than I usually hate you. WAY TO GO, JERKFACE.

–Dan Uggla, you SUCK. You were cute until you made that error.

–Ugh.
Corey Hart. Pat Burrell should have beaten you in the NL All-Star last
pick contest, you know. He’d have looked a hell of a lot better out
there. Granted, he still can’t run worth beans, but his hair would be
perfect. Because, you know, that sort of thing totally matters.

–AL
dugout? Josh sofreakinhotIjustwannascream Hamilton! *squeal* Hey!
Camera! No need to pan back to the game! We’re in extra innings. That’s
not exciting at all!

–McLouth, whoever you are, your hair is kinda hot.

–Ooooh, Brad Lidge. This guy’s growing on me. He’s kinda hot. He’s no Cole Hamels, but he’s not chopped liver, either.

–Crap. I wanted this crazy-long baseball game to end…but not like
that. Damn you, American League. I’d totally hate you right now if you
didn’t have a bunch of hot players on your All-Star team.

In conclusion: I really need to find another adjective to use besides the word hot. Thesaurus, here I come!